NextPittsburgh: 3 Rivers Outdoor Co. to rent kayaks, paddleboards and even hammocks at new location in Aspinwall 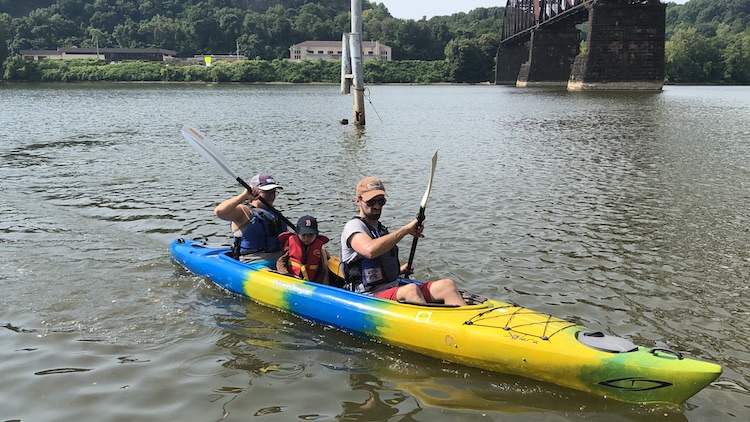 Summer in Pittsburgh is glorious, even if the sun doesn’t shine quite as much as we’d all like. This year, Pittsburghers will have one more way to soak it all in and relax by the water: kayaking and lounging in hammocks at Allegheny RiverTrail Park.

The Regent Square outdoor gear store 3 Rivers Outdoor Company (affectionately known as 3ROC) is opening an outpost at the park in Aspinwall, starting with a soft launch on weekends in May and a grand opening on Memorial Day Weekend. The new shop will offer kayak and stand-up paddleboard rentals, plus other outdoor gear and hammock rentals. The outpost will also serve as an event hub, hosting yoga and concerts in the park throughout the summer and early fall.

3ROC co-owner Christine Iksic says it had been a dream of hers to do something that gives more people access to the rivers in Pittsburgh.

“There’s something about being on the water on a hot summer day — it just makes me happy, and it’s calming,” she says. “We’ve got these beautiful rivers right here. You don’t have to drive an hour to go to a state park. It’s an urban wild experience.”

Prices for kayak and paddleboard rental will be comparable to what other Pittsburgh vendors (such as Kayak Pittsburgh) charge, says Iksic, roughly $18 to $25 per two-hour period. 3ROC will also offer half-day or full-day rentals and a “try before you buy” way to purchase as well. And there could be a membership pass option in the future.

Iksic says she hopes the outpost opening will be just the start of the possibilities for 3ROC at Allegheny RiverTrail Park. Eventually, it would like to add a fire pit and Adirondack chair rentals and partner with local breweries to “continue on with the culture and atmosphere that we have over at Regent Square.”

3ROC is also working to solidify a partnership with Pittsburgh kayaking group Outkast Paddlers to host the Pittsburgh Paddling Festival at the park in late July. The festival would begin with a film about kayaking/paddling on a Friday followed by a weekend of real-life paddling events.

Iksic grew up in the Pittsburgh area and left to pursue a career in aerial mapping in New Zealand and around the world. She returned to Pittsburgh in 2009 for family reasons, but “stayed because of the white water.”