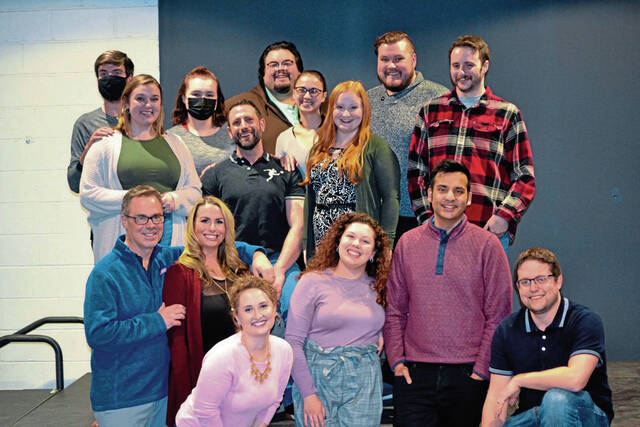 A musical comedy about relationships and marriage foibles, which some consider to be composer Stephen Sondheim’s best work, will be staged two weekends in March along the Allegheny River in Aspinwall.

“Company” will be presented by Riverfront Theater Company on March 17-19 and March 24-26 at Allegheny RiverTrail Park off Freeport Road.

“This show has something for everyone,” actress Carly Fuller said. “Because it touches on so many different relationships and types of romantic connections, there are moments that any person can find relatable.

“As a single person in my 30s, I am all too familiar with the questions from my married friends and the world of dating.”

The Tony Award-winning play was first produced on Broadway in 1970. It was nominated for a record-setting 14 Tony Awards and won six, including Best Musical and Best Score.

Written by George Furth, the musical features some of Sondheim’s best-known songs, including “You Could Drive a Person Crazy” and “Being Alive.”

A plot is strung together with vignettes that begin with the 35th birthday of a confirmed bachelor, Robert, contemplating his pledge to remain unmarried.

He relies on friends to relay the pros and cons — some hilarious, some harrowing — of marriage.

“The audience can expect a wonderful and talent-filled night of musical theater,” director Matt Mlynarski said. “We are presenting it in a way that will immerse the audience in the vignettes of the show, and we will all go on Bobby’s journey together.”

Mlynarski is making his directorial return to Riverfront Theater Company after a long hiatus that dates back about a decade to when the group staged its performances at the old community center in O’Hara. He most recently performed with the group last year after landing the role of Wadsworth in the virtual production of “Clue.”

Fuller said community theater appeals to her for its chance to present high-profile shows in an intimate space with local talent.

“Not being able to perform over the covid quarantine periods really made me miss live theater and the feeling of being in a cast,” said Fuller, who has been performing since elementary school.

She said she is eager to bring the role of Joanne, who is blunt, brutally honest and sometimes exasperating, to life in the upcoming show.

Likewise, lead performer Rick Hvizdak has been acting since age 9 and has performed in more than 40 shows.

Working on a Sondheim production is considered the “holy grail,” he said.

“When I saw they were holding auditions for ‘Company,’ I came out of my five-year hiatus to audition,” Hvizdak said. “Doing the production in a unique space at the riverfront presents us the opportunity to intimately share this story about evaluating life choices and relationships.”

Audience members must show proof of covid-19 vaccination or a negative test from within 72 hours.