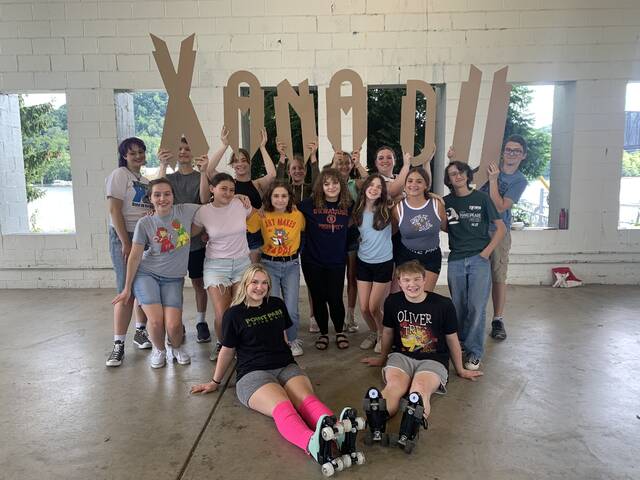 A musical fantasy with rad costumes — on wheels — will transform the stage at Allegheny RiverTrail Park for an out-of-this-world rendition of “Xanadu.”

Riverfront Theater Company’s Young Artists will transport audiences to the disco-loving days of 1980 for the roller skating adventure. It will be presented at 7 p.m. Aug. 3-6 at the park in Aspinwall.

“I think that the audience can expect an unforgettable experience full of heart and humor,” said recent Fox Chapel Area graduate Tyler Drum, who landed the role of Danny Maguire.

In true theater-in-the-park fashion, performances will take place outdoors. Tickets start at $25 and are available at riverfronttheaterco.org.

“Xanadu” is a Tony-nominated show that follows the adventures of a struggling artist in Venice Beach, Calif., who falls for a Greek muse that descends from the heavens of Mount Olympus. Plot lines teach persistence and self-belief, all while rolling along to a hit score that oozes with upbeat, toe-tapping tunes.

“I’m most excited for the songs I’ll get to sing as Danny Maguire, as I believe they’ll all be a blast,” said Drum, 18, who first caught the acting bug in Fox Chapel Area’s production of “Les Miserables.”

The cast features 20 young artists from across the region, representing 13 school districts. There are several students from Fox Chapel Area, including Vie Filar, Grace Gouwens, Kris Pizzella and Sophia Rike.

At 15, Piper Redford already is a veteran of the stage. A sophomore at Lincoln Park Performing Arts Charter School, Redford has been acting since she was 6. The electrifying, energetic “Xanadu” will be her 35th show.

“I am excited because I get to show many of my talents like roller skating, tap dancing and using accents,” she said.

The show is directed by longtime local thespian Jim Froehlich and choreographed by Jenna Bowman.

Travis Rigby, a music teacher at Westinghouse Arts Academy, serves as musical director. Over the past 12 years, he has worked as a music director, conductor or performer in a number of capacities. His first show with Riverfront Theater Company was “Company” earlier this year.

“I’m excited to now be part of this amazing family,” he said. “The energy levels of the cast are off the charts, and they will have everyone laughing. Our creative team is fantastic, really well-balanced, and they all bring life to the show in different ways.”

Rigby said the audience can expect a stellar cast of students.

“They have brought 100% to every rehearsal, and they always have me amazed at how quickly they can learn music as well as how much attention they pay to detail,” he said.

“If you closed your eyes and just listened to them sing, you’d never know they were children.”