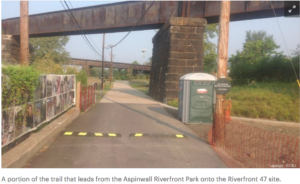 The nonprofit that oversees the Aspinwall Riverfront Park reported on its Facebook page that Allegheny Valley Railroad has agreed to sell the organization the 3.6-mile Brilliant Line that extends over the Allegheny River and is campaigning for support to buy and turn the unused rail line into a new trail.

The park’s leadership reported the news on its Facebook account on Sunday, describing the Brilliant Line as “a magnificent” nearly 4-mile long rail corridor stretching from the park, up Washington Boulevard into the East End, with spurs stretching towards Verona and the Waterworks Mall.

Aspinwall Riverfront Park indicated it is applying for federal stimulus funding to buy the trail corridor, which it indicated will cost $3.5 million. It’s a property the AVR no longer has use for since it was long used to serve the large scrapyard that operated along the Allegheny riverfront for decades.

According to Aspinwall Riverfront Park, the line is within a 10 minute drive of 300,000 residents and if turned into a trail would become the largest bike-and-pedestrian-only access across the Allegheny River.

The prospect of what the park’s leadership calls a “generational opportunity” has implications for the Riverfront 47 site that adjoins the park, a stretch of 47 acres of riverfront land that spans from Sharpsburg into Aspinwall and O’Hara that’s in the long-term process of being redeveloped.

The park’s leadership is soliciting letters of support and conducting a survey on the subject of converting the rail line into a trail as it seeks to apply for funding to buy and convert the line.