Residents from Sharpsburg to Pittsburgh’s East End could be connected by a four-mile bike/pedestrian corridor that would provide access to fitness, recreation, shopping and dining in a project that’s expected to cost nearly $14 million. 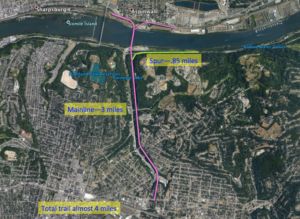 The Brilliant Line stretches from the park’s shoreline up Washington Boulevard past Highland Park, Lincoln/Lemington and beyond. Some spurs of the trail stretch toward Verona and The Waterworks.

“It is magnificent, and we are incredibly grateful to the railroad’s leadership for their willingness to sell this fabulous piece of property and make it into a regional asset,” park Founder and Executive Director Susan Crookston said, adding that it has been a long and collaborative process.

But the park needs help quickly from the public to help secure a federal stimulus grant for the cost.

The line is expected to cost $3.5 million. It will cost another $10 million for upgrades.

Park leaders are urging people to email letters by today stating their support of the project, including their name, address and why the project matters to them. Emails can be sent to susan@aspinwallriverfrontpark.org. They will be included in an application package sent to U.S. Rep. Conor Lamb.

Anyone interested can also complete a survey at aspinwallriverfrontpark.org, which will be compiled and delivered to Lamb’s office.

Park organizers are thrilled by the community support and in just two days have already exceeded their original goal of 100 letters and 1,000 surveys completed.

“We’ve been blown away by the outpouring of support from every part of our region” park Board Member Trish Klatt said.

She collected 66 handwritten letters at the park on April 4 and urged people to keep writing.

“The more we have, the more powerful our application will be, so keep it coming,” Klatt said.

Representatives from Allegheny Valley Railroad could not immediately be reached.

Crookston said the Biden administration’s recent legislation to support the creation of infrastructure that will reduce climate change, increase equity and redress infrastructure gaps in disadvantaged communities presents an unprecedented opportunity to secure money for the project.

Park leaders are hailing it as a once-in-a-lifetime opportunity.

Trail advocate and Fox Chapel Councilwoman Betsy Monroe said, “This is incredibly exciting and a true game-changer for our region.”

The corridor would be the largest bike/pedestrian-only access across the Allegheny River and would help some 300,000 people who live within a 10-minute drive of the Brilliant Line to reduce their carbon footprint by biking to jobs, shopping and more.

“The Line will create a loop with the Three Rivers Heritage Trail along the river which will eventually connect to Downtown Pittsburgh,” Crookston said.

Twice the size of New York City’s HighLine, the open green space and trail will give thousands of people access to recreational opportunities and mental and physical health benefits, she said, and will support natural habitats for wildlife.

Crookston expects to create about 75 jobs through construction of the park and trail.

The Brilliant Line was built by the Pennsylvania Railroad as a cutoff to avoid the congestion at Union Station but was abandoned from 1976 until 1995, when portions of it were repurposed by Allegheny Valley Railroad.

It includes four bridges, one of which is the picturesque steel bridge next to the park that spans the Allegheny River.

The Brilliant Branch Bridge was used for 80 years to access the Azcon Metals scrap yard, which stretched along the riverfront into Sharpsburg. That property closed in 2015 and was bought by developers who eyed the land for housing and light industry and retail.

“Without an industrial customer, the line is no longer a productive asset for the railroad,” Crookston said.

She was among those behind the development project, along with the Pittsburgh-based Mosites Company, who envisioned a mixed-use plan with 500 housing units amid commercial buildings in a spot called Riverfront 47.

In 2019, the group received a $9.6 million loan from a private investment fund to get the site shovel-ready.

The Brilliant Line project will not happen quickly, she added.

“Transactions like this one are very complex and take time and many regulatory approvals,” she said.

“Even if we had the money in hand to buy the land right now, it will be at least a year until the transaction can be completed,” Crookston said.

“And it will take more time to build out the corridor, but this is tremendous progress and we are excited.”

In the meantime, it’s critical that the public consider that the Brilliant Bridges and the Line are still railroad property. Trespassing on it is both unsafe and a federal offense, and it could put the transaction at risk.